Well, my quilt is, not me. Grotto was just in the Mid-Atlantic Quilt Festival, and now it's been accepted for the AQS show in Paducah, Kentucky! 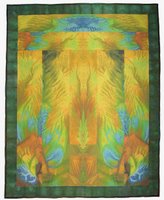 Quite a few others on Quiltart have also been accepted - congratulations to you all. Elle went to the MAQF, and wrote several posts with photos for those of us who couldn't be in attendance. I hope someone can do the same for AQS, as unfortunately I don't think I'll be attending it either.

Not a lot of updates here on the creativity front. My weekend can be summed up in 7 words:
Pinewood Derby and
Chuck E. Cheese Birthday Party

Team Ooh!PC was very successful at the Pinewood Derby. Yeah boys! I managed to knit a few rounds on a sock at the Pinewood Derby, but inadvertently inserted a short row in the ribbing at the cuff!!? That's what you get for trying to knit standing up surrounded by dozens of very excited children. I've nearly recuperated from two super loud children's events in two days.
Posted by Diane Doran at 9:18 AM

Your comments on your weekend were so funny! Gave me a good laugh; thanks! Great news about your quilt!

Congratulations. Your quilt is wonderful.