I bought the pattern and fabric for this skirt a long time ago and never got around to making it. Judy made a few and seeing her fabrics inspired me to finally make mine. 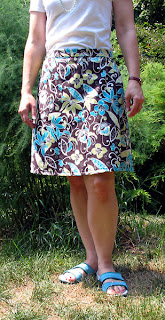 I think my 7-year old photographer did a pretty good job.
The pattern is Cute Skirts by Favorite Things. The mods I made are: shortening it about 5", lining it, and taking it in as per Judy's instructions on her blog. (And thank you Judy for letting me know how you know how you fixed yours!) The next one I make is going to be a smaller size so that I don't have to take it in in the back - the first one had too much fabric by and under the elastic there before I took it in. The skirt is very comfortable and I'm looking forward to making a few more.

Some of you may question why I'd bother to line a simple summer skirt. When I first started working after college most of us gals wore skirts, if not suits, every day. I made many (OK, most) of my clothes back then, and it became very obvious to me that lined skirts were more comfortable and looked better than wearing a slip. I've also found that when a cotton skirt or dress is lined that it doesn't wrinkle as much when you sit on it. It's an easy modification and IMHO makes the skirt more wearable.
Posted by Diane Doran at 1:15 PM 8 comments:

You know how sometimes you're supposed to be doing something, like studying for a test, or meeting a deadline, but you just can't help yourself from sneaking away from time to time and indulging yourself a little? That's how this much (about 20") of my chevron scarf got finished. I figure that's about a third of way the way done, as at about 61" tall I don't think I need a 70"+ long scarf. 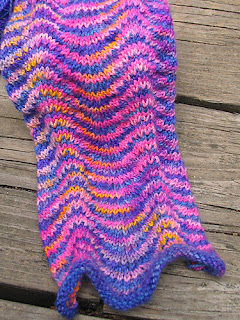 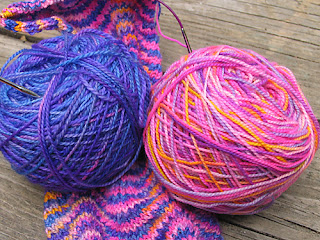 The yarn on the left I dyed at a class associated with last year's MD Sheep and Wool Festival - the very day I met the lovely and talented Coleen. The yarn on the right is Sophie's Toes Bouquet, dyed by the wonderfully versatile Emily. I've kind of lost my momentum, but I'm thinking it's going to make great travel knitting when we go on a trip later this summer.

Many thanks to all of you for your nice comments on my quilting. It was the most fun I've ever had quilting a quilt.

Now I'm off to hopefully finish up a cute skirt!
Posted by Diane Doran at 12:59 PM 2 comments:

Well, I did finish my quilt in time for the deadline - just. It was an exhilarating, educational, and exhausting experience. Here are some detail pictures (all clickable for bigger versions). 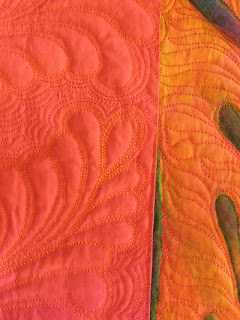 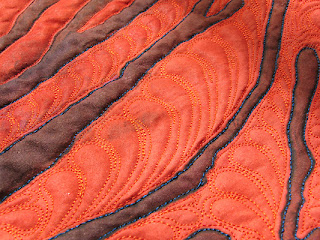 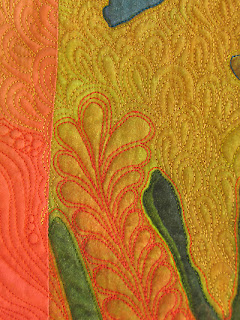 And here is part of the back. 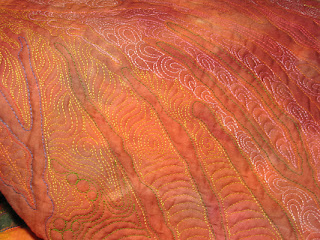 I began quilting it May 11, and finished June 12. While I was making the quilt I had so much to say, but no time to say it. After I finished it I couldn't remember anymore all the things I wanted to say.

My preschooler was finished with school for the year, so he was my constant companion while I made the quilt. He was such a little trooper, and spent hours drawing sea creatures, and eventually cutting them out. Here's one of his first attempts at drawing a squid. Don't be fooled by the shape of this creature's head and tentacles - you can tell it's a squid because it only has one eye (wink). 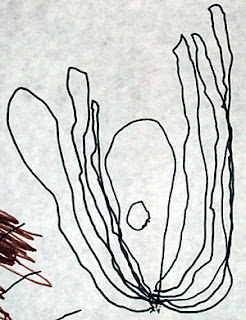 My husband went on numerous business trips this year up until about a week after the quilt was finished. He was gone enough that he started taking red eyes home just so he wouldn't miss another day of the week home. I attribute some of my burnout to that - it was getting harder to herd the children by myself to umpteen school/cub scout/sports activities. My belief in a higher power was once again validated one Sunday when I really needed to make progress on the quilt. My husband was out of town, it was raining all day, and low and behold there was a Pokemon marathon on TV - the only show that could keep all three boys occupied for any length of time. I did quite a bit of quilting that day.

OK, I could blab all day here, but basically I've been trying to get my house in better order and live in the moment for the last few weeks. Despite feeling some creative burnout I've worked a little bit on a few things in the last few weeks, so hopefully I'll post again soon and share them.