Well, we all know what road is paved with good intentions. This week I missed two deadlines, but I'm OK with it. One was for the IQA World of Beauty show, which is my favorite show to enter, but the world won't end if I miss entering for one year. (And I've made a great start for next year!) The other was for the SAQA auction. I've been thinking about what to make for it for some time, but nothing seemed quite right.

I think that part of the issue is that I've been examining my process. I'm a perfectionist by nature, which has served me well in the world of quilt shows, but quilting heavily with many, many thread colors is not as appealing to me as it used to be. Don't get me wrong - the look is appealing, the labor involved is not. At the same time I've been fascinated by how some other artists quilt, particularly my friends Cathy Kleeman and Deborah Boschert. A while back I played around with something that I've seen both of them do (in very different ways), namely quilt and then paint over it. I liked the results but didn't do anything with the small samples I made.

Yesterday I pulled out the samples and combined them with some small screen printed pieces. Here's a peek at the in process piece: 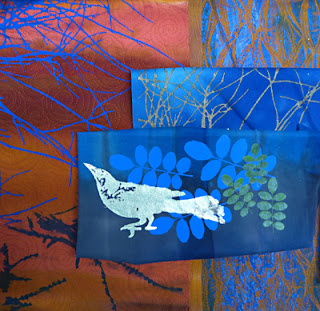 Obviously, the two blue pieces are just laying on top. What you might not be able to tell is that the background is quilted. The left hand side was then screen printed, while the right side had paint brushed over the top, leaving the furrows in the quilting unpainted. This photo has a layer of tulle over the background, which I think I'll remove in the final piece. The two blue rectangles will be trimmed, and quilted after they're put on top. What do you think?

I also have a stack of (gasp!) commercial fabrics waiting to be cut. 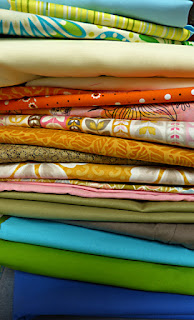 They're not all for one piece, but I do think they look pretty together. I'm making a sample for the premiere issue of Modern Quilts Unlimited, and looking forward to some straight forward piecing.

We're working on the premiere issue now, and it's going to be great - the enthusiasm of everyone involved, from the contributors to the staff, is just amazing. Look for the website to go live May 18.


The last month has flown by. I've done *lots* of quilting, but it has all been for publication or potential exhibition so unfortunately I can't share it yet.

Since I can't show the quilting, I'll show some pretty pictures: 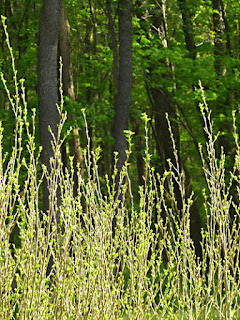 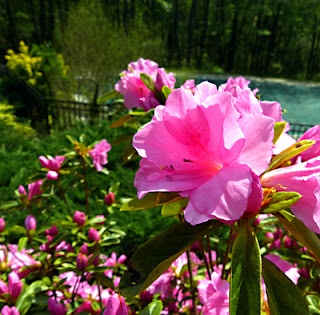 Finally I'd like to give a big shout out to Ann Shayne of Mason-Dixon Knitting. Ann wrote a soon to be released book, Bowling Avenue, and I had the pleasure of reading a pre-release copy. I couldn't put it down! It has something for everyone - romance, mystery, natural disaster, and lots of witty banter. The book is worth reading for the witty banter alone. Thank you, Ann, for this fun read!
Posted by Diane Doran at 8:29 AM 3 comments: