Following the lead of my children, that's how I'm trying to approach things right now. 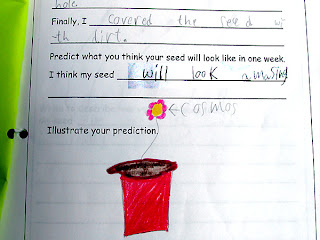 From my first grader's seed journal. Besides the illustration, I really like how he thinks his seed "will look amasing".
I'm quilting, quilting, quilting or pondering the quilting. But I'm not ready to show any in progress pictures.

I've been tagged with the 7 random things meme by both Coleen and Jody, so what the heck I'll play.

1. I've ridden on an elephant.

2. I was a rock and roll D.J. on WUMC. I think they selected me because when the program director asked me what I wanted to be when I grew up I said "Pat Benatar". Bear in mind that the year was 1980.

3. My family had two Weimaraners. The second one was photographed by William Wegman and as a puppy appeared as one of the "mice" in Wegman's book Cinderella. Our puppy also appeared in a short film by Wegman that was shown on Sesame Street.

4. My original college major was Horticulture. I was going to save the world by becoming a plant geneticist and breeding more productive varieties of grain. I changed to Ag Engineering after two years, but eventually accidentally became an Aerospace Engineer.

5. I use my left foot on the sewing machine foot control, and I never wear shoes to sew. That makes me more "one" with the machine. Seriously, you should try it - it really helps me control the speed of the machine better.

6. I've been paid to sing at someone's wedding.

7. As a teenager I babysat my way to Paris. I went on a short term exchange program to France and earned about 80% of the cost of the trip by babysitting - lots and lots of babysitting. After the trip my French improved tremendously, and at times I've even dreamt in French.

I'm going to play by Deb R.'s tagging rules of engagement. If you haven't been tagged yet for this meme, and want to be, consider yourself tagged and let me know you're playing.

Here are two token pictures. The light was so beautiful in the front yard the other day. 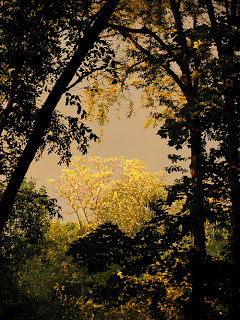 Looking across the street at a black locust in full bloom Our orange azalea
Posted by Diane Doran at 2:55 PM 5 comments:

I think I may officially be the very last blogger to talk about Maryland Sheep & Wool 2007. This will not be a picture heavy post - I tried to photograph the sheep and they were not cooperating, and the rest of the time I pretty much forgot to take pictures. But there will be lots of links.

Coleen's miniature knitted barnyard, in the same picture as above. The picture doesn't do it justice. I've never had a hankering to knit barnyard animals before, but Coleen has a talent for it. The chicken is too precious for words.

The knitters with whom I hung: 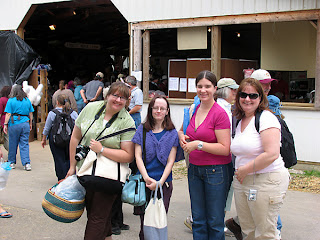 Jody, Jen, Jolene, & Coleen. The people behind them are looking at sheep.

There were more of us, but the others - including Sarah, Stacey and her sister, and Theresa, were in the main barn at this time. I also saw Minty, and met Wendy, who may very well have scored the very first wheel of the day. I briefly met Jess who's starting up Ravelry, and admit unashamedly that my jaw dropped when I saw Elspeth's skirt. I really want a skirt like hers.

Stacey's socks are works of art. I wished we had t-shirts saying "I'm With Stacey's Socks." People were stopping her and taking pictures of them.

Speaking of t-shirts, Jody's husband John deserves some kind of knitterly medal of honor. He heroically stood in line for an hour to get each of us one of the coveted shirts. Here's a blurry pic of mine:

Stacey's talents include much more than knitting. I was on a quest to get some Sea Silk, and she found the only booth that seemed to have it. Someone (Sarah? Coleen?) called me to sound the alarm. Jolene scooped up the skeins in the colors I'd requested and held them for me until I made it to the booth. What team work! I'm still trying to decide what to make with my two skeins of ivory.

Then I came home, and there was light where there had been none. 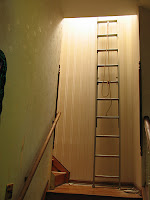 What a wonderful day! I don't make it to many quilting and knitting happenings, so when I do it's extra special to me, and everyone I went with made it even more so. Thanks gang!

Minty has always said nice things about my nature pics, so here's one for her - scotch broom in the front yard. 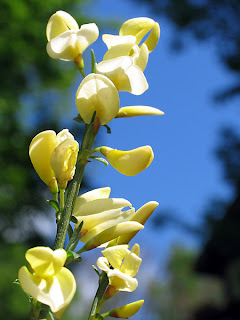 Email ThisBlogThis!Share to TwitterShare to FacebookShare to Pinterest
Labels: knitting, sheep and wool

That's what one of my old engineering buddies used to say he was doing when we'd find him sitting at his desk totally lost in thought. And that's kind of what I've been doing. 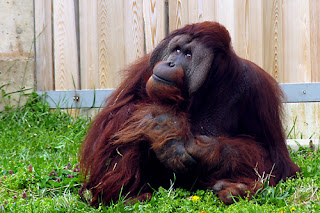 I took this during the 1st grade field trip to the National Zoo. It's representative of me during much of the last few weeks.
Just before Spring Break I realized that my major, huge, pieced quilt would not be finished in time to quilt before June. I've segued to Plan B.

I printed out 5 large strips of fabric to combine into one big design. I'm letting them sit another day or two before piecing them together, and in the meantime custom dyeing a border. Let me just say that it's hard to be me. In the first picture below you can see the border tryouts happening on the kitchen floor. It depicts numerous hand dyes of yore. Note the alphabet magnets on the refrigerator. 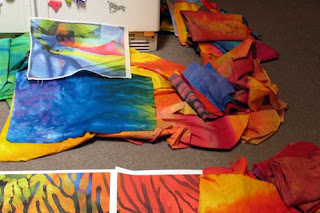 None of these gals made the squad! Custom dyeing commenced. 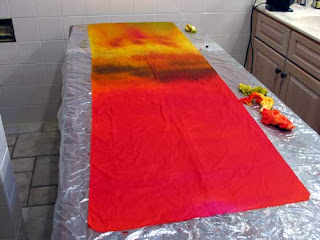 Here you see one of my dye studios (hah!) 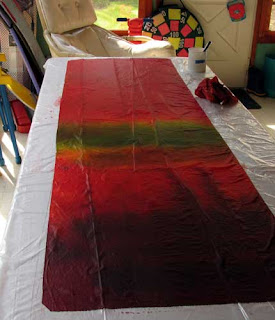 And here's the other one. Regrettably both rooms must be shared with others.
It's interesting to look at these pictures and see how autumnal the fabrics look, because I don't think the quilt will look that way in the end. But that's how the borders shook out.

So that's the scoop. And of course I'm very much looking forward to spending some time Saturday with the knit girls at Maryland Sheep & Wool. If you're there and see me please say hi!
Posted by Diane Doran at 3:31 PM 6 comments: