I'm delighted and amazed that I've somehow managed to finish three quilts this spring. I introduced the first one, California Dreaming, in my last post.

The second one, Stellar Jay at Nepenthe, is my contribution to the 2013 SAQA Auction. 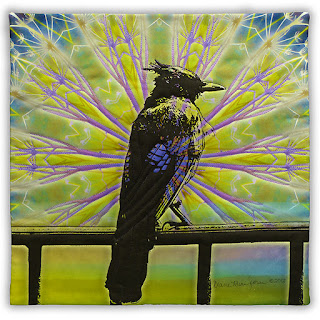 I thought I'd share a little bit about how it was made. In a way it's a sister quilt to California Dreaming.

For the last few years my husband and I have been trying to travel with our kids to places that we feel are important for them to see. We've gone to Williamsburg and Jamestown, New York City, and a variety of our great national parks. Last summer we were fortunate enough to go to San Francisco and Los Angeles, with a fabulous drive in between down the California Coast. 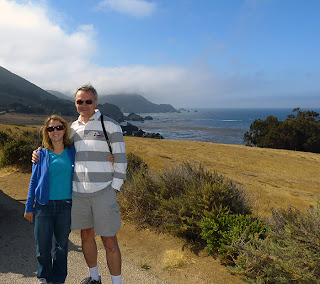 My husband and I taking a little break outside the car to enjoy the view.

The day we left Monterey we went down the coast, oohing and aahing at every turn, until we reached Nepenthe. Some folks may be familiar with it because it's a very famous restaurant, but quilters and knitters might also know it as Kaffe Fassett's childhood home. 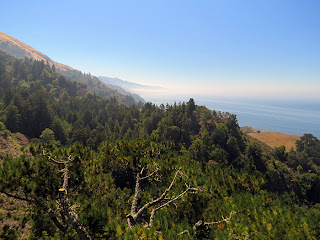 Here's part of the spectacular view from the patio at Nepenthe. The dining room wasn't open, so instead we each had a little snack while drinking in the fabulous views. Lucky for me, this handsome fellow perched right in front of us. 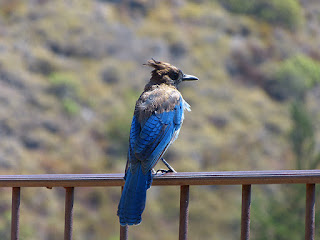 How could I not include him in a quilt?

First I upped the contrast, removed the background, and created a screen print like, black and white image of the bird and the railing.  Kaleidoscope Kreator was used to make the kaleidoscope in the background from part of the imagery in California Dreaming. 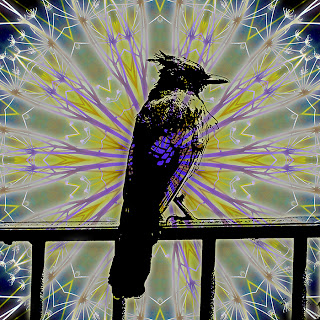 For a long time I thought that this was ready to print, and was reasonably happy with it. Eventually, though, it began to seem too busy. On a whim I added an additional element at the bottom, beneath the bird and behind the rail. Can you guess the design source? 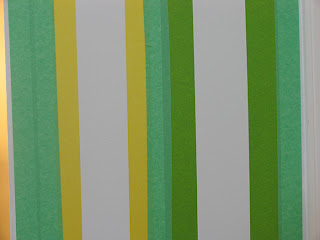 This (or a photo quite like it) was manipulated to get those soft stripes. It's a photo of masking tape in our foyer that I used as a guide while painting subtle stripes beneath a chair rail. Something about the white balance was off, so in real life some of those stripes were blue. What compelled me to photograph the strips of masking tape? I don't know, but I'm glad I did. To me the horizontal stripes really seem to ground the piece. Of course I also upped the saturation a bit and made the greens a little limier.

It's hard to see the quilting from the photo of the front of the quilt, so just for kicks here's a photo of the back before the facings were applied. 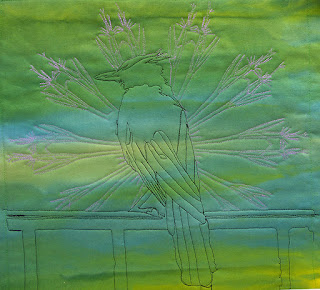 Making this quilt brought back some of the wonderful memories from an amazing trip. I hope it brings at least a little measure of that happiness to the eventual owner.