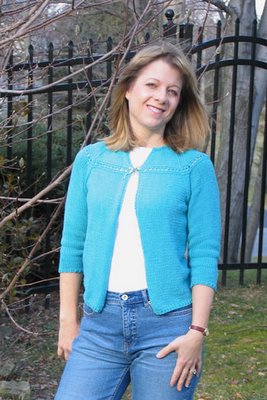 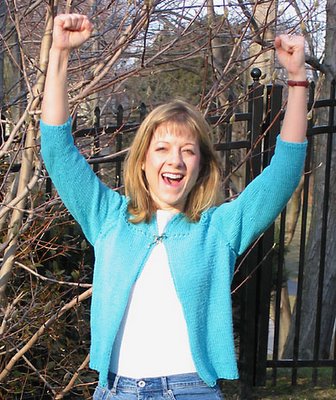 I've been wearing my new sweater since I finished it, and it's very comfortable. If I were to make it again, I wouldn't use two circular needles to make the sleeves as it produced some laddering. Instead of using the front bands from the pattern I made a two stitch seed stitch border, knowing that at the end of the games I wouldn't want to pick up all those stitches. The neck is finished per the pattern instructions. I opted out of using a button, and instead intend to use various pins/brooches as a closure. The one I'm wearing today is a gecko pin made out of shell. 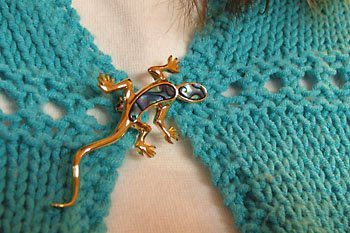 It seems like I should end this post with some deep, meaningful thoughts, but right now I'm fresh out. It'll be nice to relax during the closing ceremonies tonight.
Posted by Diane Doran at 4:49 PM

A gold medal for you! Very nice sweater!

Great job! congratulations. I have some couch jumpers who would surely love to compete for medals.

It looks so good on you! Congratulations!

That's absolutely lovely, and I adore the pin with it! Congrats on your Olympic victory!

You actually look like you just stepped out of a magazine. Very cute! Jen

Thank you guys. You are all so nice. I'm really happy with it for a "first completed sweater with sleeves".