So the deadline for two upcoming shows, SPUN- Small Art Quilts and ARTQUILTS images, is this Friday. I felt confident that it would be really easy to enter them. After all, I already had slides! Instead, it became more of an "If You Give a Pig a Pancake" scenario. This is one in a series of books by Laura Numeroff in which the scenario is that if you give (name some animal) something, it reminds them of something else, and then something else, and so on ad infinitum, until chaos ensues. I didn't quite reach chaos, but here is a brief list of the challenges I faced:

(OK, wait, I'll insert a picture of the SPUN entry first so that you don't have to read the list if you don't want to) 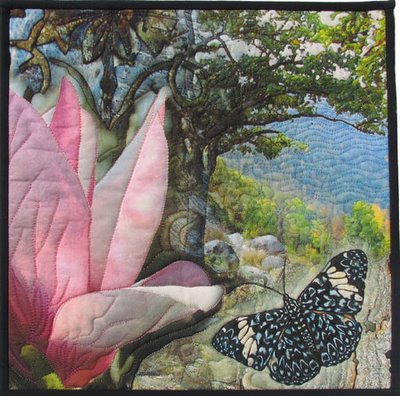 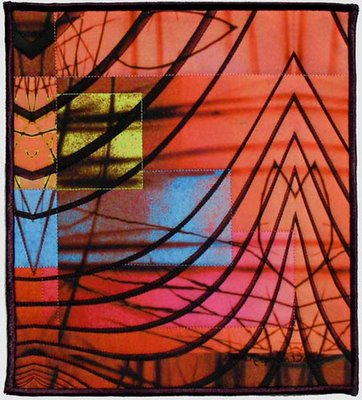 - The printer didn't want to print on envelopes. How sad is this for someone who uses a printer to create quilts on a fairly regular basis?

- For SPUN, I needed a detail shot. I only had full view slides, because it's a very small quilt. This meant I needed digital images. No problem. Until I knocked over the expensive camera, and it wouldn't turn on, and then I figured out that the battery compartment door was open. (Vince, sweetie, it's OK, really. It's working fine!)

- And then I needed to create a CD, which I almost never do. And the first software I tried to use wouldn't work. Thank goodness I had Picasa.

-Then I needed a suitable envelope. This envelope was big enough that I needed to get it weighed at the post office.

-That meant I had to get two children in coats and shoes to go with me. And even wonderful children aren't always helpful in this department. And one of said children is recovering from strep, that presented itself as a seemingly innocuous rash that alarmingly quickly became horrible and required a trip to the emergency room on Sunday. But he's been on antibiotics for 48 hours and that means he's no longer contagious.

-When we got to the van, the smallest child's seat was not installed, because the van had been used to haul something big over the weekend. And we hadn't all been somewhere together because of the kid with strep. I don't mean the child safety seat, I mean the seat that fits into the tracks in the vehicle.

-I'm on the small side of the size spectrum, never having attained even 5'2", but I wrestled that seat into the van. And then we got to the post office right before they closed for lunch and everything was OK.

Knitting Olympics update: it's playing with my mind. I kept doing row calculations in my head before I went to sleep last night. I'm more than half way through the last sleeve, and still have the yoke to do, but I think I'm going to make it.

I hope that wherever you are your day is as sunny there as it is here!
Posted by Diane Doran at 1:45 PM

Both of these quilts are superb, Diane. I can't believe what you went through to submit them....you should reward yourself with a massage!

Wow Diane! Way to stick to it, now if I can just get myself going, lol.

wonderful quilts. don't you just love it when one thing leads to another and then another? LOL

My Epson CX7800 has a little lever to move when printing envelopes. It usually prompts me, I think.

You get a medal for hard work and determination. A lesser person (me) might have called it a day.

Your quilts are really beautiful, so it was probably worth it. Jen

LOL!! Submissions are their own animal, aren't they? Good luck on the SPUN entry and they are gorgeous!