At the risk of becoming a nature blog, I'm going to have to give you a wildlife update. First, though, two gratuitous pretty pictures.

I've mentioned previously how great lilies grow behind our sunporch and deck. This year I've been an extra bad gardener, and haven't weeded much. As a result rogue morning glories have climbed the lilies, and somehow they've caught my eye more than the lilies this year. 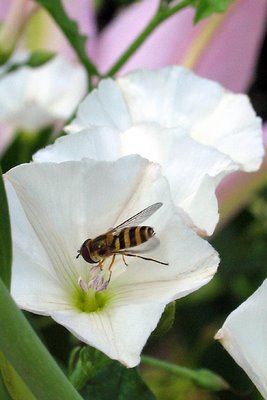 A visitor this morning 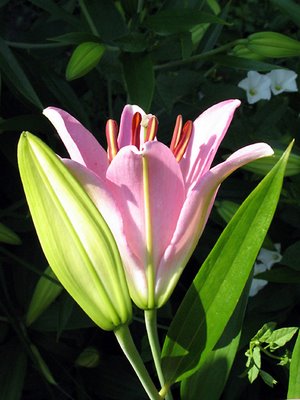 Note tiny morning glories in the background
OK, on to the wildlife update. On the Fourth we saw a wonderful fireworks display over Lake Kittamaqundi. I was very impressed. Later that evening I looked again at our wonderful natural display of fireworks, the fireflies out back. As I stood there the numerous frogs out back went silent. I heard a rustling noise. After fetching a flashlight, I discovered a mama raccoon and three babies! As soon as they were gone the frogs continued their concert.

Next night, 11:00 PM, it started to rain very, very hard. I encouraged my husband to go put a car in the garage in case of hail. He was gone a very long time - too long. My imagination was running wild (as in rabid skunk). When he came back in here was the conversation.

Me: You were gone a long time. Is everything OK?
Husband: Well, there wasn't any hail.
Me: I almost came out to make sure you were OK.
Husband: You would have found me crouching on top of the Civic.
Me: Huh?
Husband: Three skunks came into the carport, so I climbed on top of the car.

OK! I suggested we get a flashlight and investigate. Sure enough, three baby skunks were under the Civic. I truly failed as a blogger by not getting pictures, but I wasn't willing to push my luck. Apparently they live under our deck, and came out because there was too much water flowing under the deck. I've allowed myself a 24 hour freakout period (OK, 48 hours), and accepted the fact that if we don't bother the skunks they probably won't bother us. The one my husband saw on Saturday was probably a baby, and seeing it during the day doesn't mean it was rabid, maybe it was just exploring the world.

Best skunk related quote to date was from my older brother, whom we'll call "Trapper Bob" due to his outdoorsy nature.

I tried to sell Bob on the idea of coming over to help get rid of the skunks. When I described the opportunity to him he first thought I was referring to deer. When I said no, it was a family of skunks, he said "That stinks!"

Next time on Animal Planet: hopefully something fabric related.

Your flower pictures are gorgeous! I hope those skunks don't decide that your civic is more comfortable digs than under your deck!

At least they are cute!!

Skunks . . . be sure you have some hydrogen peroxide and baking soda at the ready if you do get sprayed. Is it time for a b&w quilt?

I was once told by a wildlife control officer that skunks hate mothballs. If you toss some under the deck, they'll probably move pronto. That's if you don't want to run the risk of scaring them, which can be really unpleasant.