One of the best parts of meeting other artists is seeing what they make, which often leads to being inspired by them. This is just what happened when I met Terry White in the green room for the QA TV taping in Cleveland. She showed me some stunning examples of her thread painting on some hand dyed osnaburg. I'm sure you've seen the ads for Star Threads that feature her lovely work, and they are even more impressive in person. Then she gave me some of the thread she designed! I couldn't stop thinking about it.

Now, I'm a super fine thread, tiny needle, tiny stitches kind of machine quilter, and this thread is 30wt. But I checked out some of her videos and decided to first try thread painting instead of quilting with it. (I'm working on next year's new and improved Filler Finesse column for Machine Quilting Unlimited and needed to make a sample to quilt on, and didn't feel like making an applique.) So here's my experiment (without quilting). 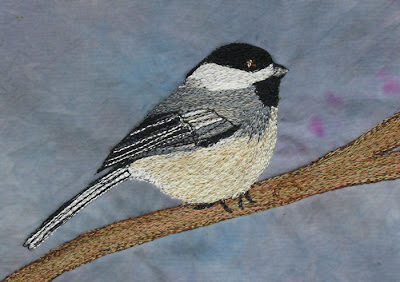 What was really great about this was how much work the thread did for me. I always thought of thread painting as involving endless thread changes, but because of the gradation of color in Terry's threads this was much easier than I anticipated. The thickness of the thread is also a plus, as it fills in faster than a thinner thread. I have not thread painted anything like this before, but it was very fun and I'm so glad to have tried it out. And the thread is so pretty that I'm sure I will quilt with it eventually.Thanks, Terry, for the thread and the inspiration!
Posted by Diane Doran at 7:14 PM