Where the Wild Things Are

It's Halloween! Scary things can happen on Halloween and the pictures below prove it.

Let's take a walk down memory lane and look at some of the costumes I've created for Halloweens past.

Two years ago I was quite the busy seamstress (emphasis on stress) just before Halloween. Two wizard costumes, and a fish! 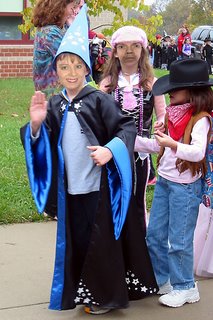 Doesn't that little girl in the pink hat look mature for a 2nd grader? 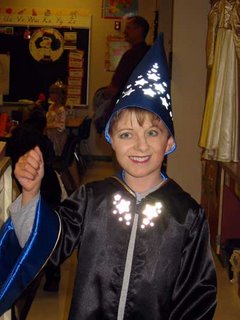 I included this picture to show that the stars are reflective. I bought reflective iron on tape, and found out I could cut it with paper punches. 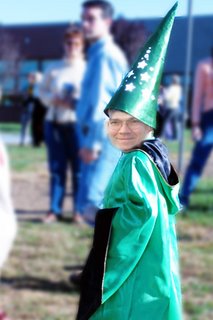 The year I made these costumes my youngest child was not quite two. He looooved the fish costume! Here he is trying it on just before I finished making it. (He ran around the house two times before I caught him.) 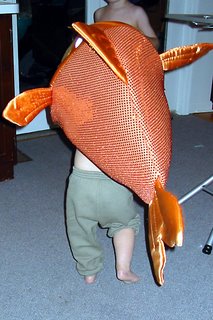 When the costume was finished he refused to put it back on, and we had to go with the backup (store bought) cow costume. (The cow costume is the scariest one we've ever had, in that no child has ever been seen to smile while wearing it - it's a mystery.) The fish eyes are also that reflective tape. 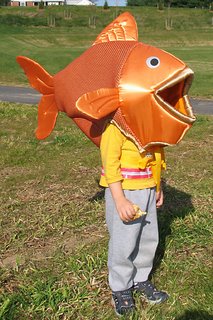 My little fish reluctantly waiting for his brothers to parade by at school today. Note the dejected posture - I think he's coming down with something. 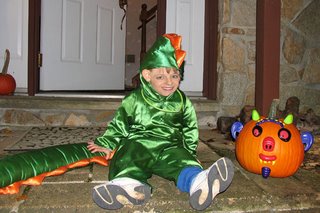 Look at this dragon/dinosaur/Stegosaurus? We've gotten lots of wear out of this costume, made 6 six years ago. The fish is going to stay inside on ice, while the dinosaur (hopefully) goes out trick-or-treating once again.

OK, time for a wild life update! Red fox spotted in the yard, Sunday morning, 7:20 am. Sorry for the (lack of) picture quality - he was about 125 feet away, through a window, and I was sitting in the bay window with a three year old while taking it. 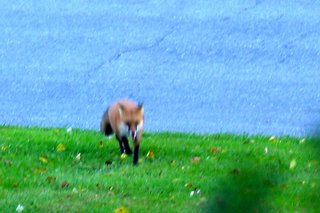 And you thought the skunks were gone? This one was caught climbing a wall the other day at Centennial Park. (Costume courtesy Halloween 2001, but still getting good use.) 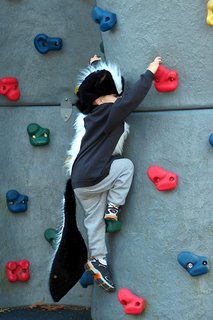 And this one was just taking pictures 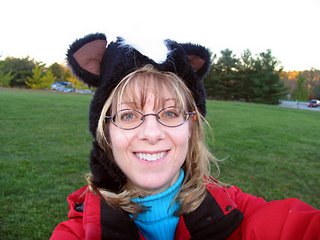 Have a safe and happy Halloween!
Posted by Diane Doran at 3:21 PM

OMG! I love that fish costume!

Those costumes are awesome!! Your kids are so lucky to have such a creative mom. I love that fish costume too!

I TOTALLY LOVE the fish costume.
Yeah for moms that make hand-sewn costumes...my mom made ours for years. I agree with Coleen, your kids are LUCKY.

Me, too! Love the fish. I made a shark costume for my son way back when Jaws was the rage - not nearly as clever!!