In my last post I shared a simple technique for creating a kaleidoscope in Kaleidoscope Kreator, then importing the saved Kaleidoscope back into the program for further manipulation. Today I'll show an easy digital layering technique for creating the center of a medallion quilt. (If you are not familiar with the Kaliedoscope Kreator program, which I'll call KK from now on, you can refer to my original post, or go to the KALcollections website for more information.)

I'm lucky to write a column called Filler Finesse for Machine Quilting Unlimited.  Each issue I show how to quilt three filler designs, including a written description, diagrams, and stitch outs of each filler. I also create a composition where I use all three fillers. In every issue I try to make the composition a little different. The first three issues of this year I made pictorial compositions (see an example here), but I wanted to switch things up a little for the next three. Here's the example from the July/August issue: 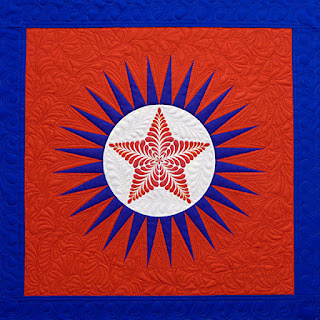 When I first started quilting the part I loved the most was the piecing. I've pieced many a sharp point in my day, but honestly didn't want to do that for this design. OK, this may seem like cheating, but for this little wall hanging I decided to use a couple of different software programs to create the look I wanted. It was much faster than piecing!

First I used Electric Quilt to create the blue rays. Briefly, I modified the block "Dean's Sunflower Sun", found in the Contemporary Pieced, Sun Compasses library. I simplified the block so that it consisted only of the rays, and then used the block by itself in a quilt layout. Then I exported that image as a jpeg. I originally saved the "quilt" with black rays, and later changed the background to red and the rays to blue in Photoshop. 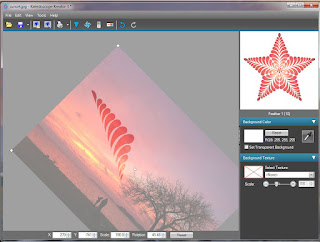 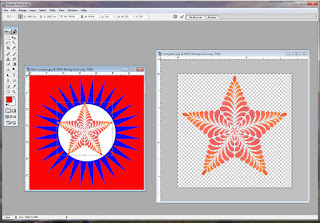 I resized the star to fit the center circle, adjusted my colors a little, and voila, my cheater panel was complete! I printed it as large as I could (13"x13" on my printer), then added the blue borders. All of those solid colors provided a great canvas to show off my fillers.

Stay tuned for Part 3 of this series on ways I use  Kaleidoscope Kreator in my work, where I'll show how I've used kaleidoscopes in digital collages for art quilts.
Posted by Diane Doran at 7:30 AM