Sunday I went over to Frederick to check out the Rose Hill Manor Quilt Show. Imagine my surprise (and delight!) when I realized that I'd won Best of Show with Grotto. I'm still pinching myself!

The crocuses started blooming on Tuesday. Then it snowed on Wednesday (yesterday). Oh well, I've always wanted to take pictures of crocuses blooming in the snow. 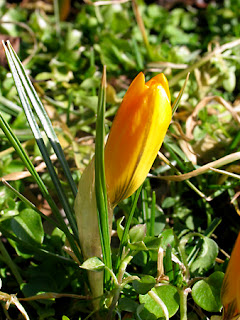 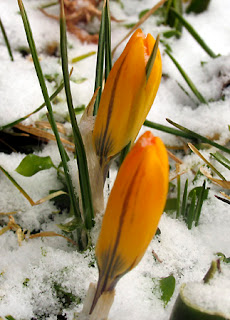 School was cancelled (???). I won't question the wisdom of the School Board as I'm sure they had good intentions. It did afford me the opportunity to make some eggs ala Martha with the able assistance of at least one of my children. My workspace looked a little messier than Martha's but I'm pleased with the end result. Note that I haven't applied a coat of Mod Podge to the outside yet to seal them. 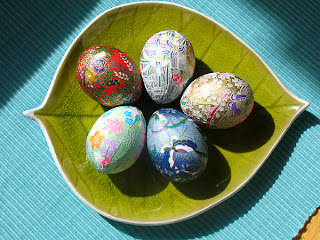 Origami covered eggs
As you might guess we have a little more fabric lying around here than fancy origami paper, so I tried out some of that as well. 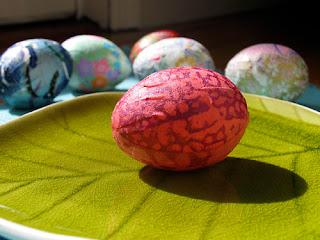 Fabric covered egg - ostracized by the other eggs because it isn't as smooth as them
The fabric egg looks OK, but I prefer the origami ones. It was harder to get the fabric to lie flat. This particular fabric was hand painted and I think that helped to keep it from fraying during the gluing process.

I made a very cute tote bag last week to give to a 7 year old girl for her birthday. Unfortunately I didn't get a picture of it as the camera was already with Team Doran Racing (at the Pinewood Derby) by the time I finished up the tote. (Aside: I'm finally hip and cool enough to have a camera on my phone, but not hip and cool enough to remember I have it.) Anyway, it was so fun and fast that I'll probably be making another one for an upcoming little girl's birthday and I'll be sure to take a picture of that one.

Thanks for that egg link! I see fabric eggs in our future. And this made me laugh so much because I didn't know I had a camera on my phone and my 5 year old showed me how to use it today.

Congratulations on the Best in Show! You are amazing, Diane! Those photos are incredible too (but I say that whenever you post!).

That quilt just keeps on giving you awards!!

The eggs are fabulous.

Your Martha eggs are lovely. There are always excellent craft suggestions in her magazine.

Well done! And snow already - your summe sounds even worse than ours. I've never seen eggs like that, they look wonderful.

The eggs look amazing! I think I have to try that!

I'm just doing a test here. Every comment I've received since changing to the new blogger has had a "no reply" email address, so I'm investigating.