... that ends well. My husband is doing great (well, he's a little sore). He had a radiofrequency ablation for a variety of cardiac arrhythmias that had become increasingly stressful. We're knocking on wood that they're all gone, and we can start the New Year right. Thanks for the notes of concern!

During the 6.5 hour procedure I had lots of time to knit. I must say that I was very thankful to have a meditative and relaxing pursuit to pass the time. I dabbled with some socks, worked on a scarf, and started and finished a Calorimetry. 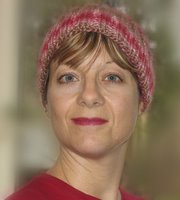 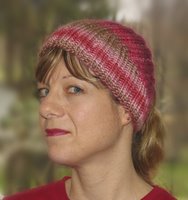 I used Patons SWS, inspired by Coleen and Laura (though I haven't seen their creations in person, I trust their judgment).

The other thing that kept me occupied was listening to Cast On. I unexpectedly received an Ipod Nano for Christmas, but didn't have time to load it up before our travels. I hurriedly downloaded two episodes of Cast On and wished I'd loaded more - it was simply wonderful and made the wait time pass much more quickly.
Posted by Diane Doran at 2:22 PM

Glad your DH is doing well. I love Brenda Dayne! She has such a wonderful voice and Cast-on is a great listen.

I'm so glad that all is well! May it stay that way! Oh, you are making me want to go buy yarn and start some new projects.

I'm so glad to hear your husband is doing well.
Love your calorimetry! don't you love that SWS?

It was really great to see you last night (and your pretty ribby cardi!) I hope your husband is okay! Cute Calorimetry! I have the same colorway of the SWS...

glad all is well.