End of the Season

The party's over - literally. My last birthday party post until next year! (You can breathe a sigh of relief now as we move forward to more quilt related content after today. Maybe some of my quilting friends will come back.)

The birthday boy had trouble settling on a theme, so 9 days pre-party I decided on dinosaurs and rushed the invitations out the door. I over invited a little, thinking some folks couldn't make it on short notice - instead we had twelve little attendees (including my three). In the end there were 27 people in my house - for me, this is quite the undertaking.

After some intensive googling, I came up with a few activities. One was to have small toy dinosaurs and "fossils" buried in sand for the little paleontologists to find and keep. Here the birthday boy is helping me make the fossils last week. 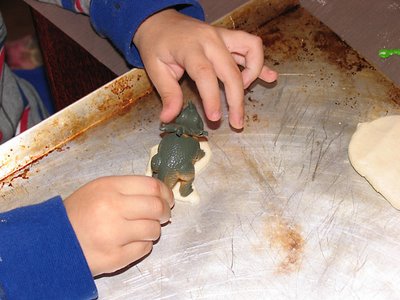 Recipe: 2 cups flour, 1 cup salt, 1 cup water. This was a little sticky, but adding too much flour will make them puff up. What worked for us was to put little piles of dough on the cookie sheet, make impressions with dinosaur feet, then bake at 325 degrees for 1.5 hours. 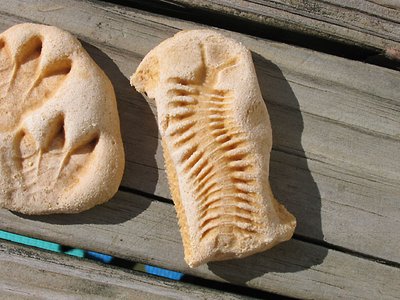 Some of the finished product.
This was so successful for us that we made additional fossils at the party (that I forgot to dole out to the guests after baking - oh well.)

Of course it rained the whole day of the party, so this was an indoor activity. We buried the dinosaurs and fossils in bins of sand. The aftermath is below. The fossils were more popular than the dinosaurs. 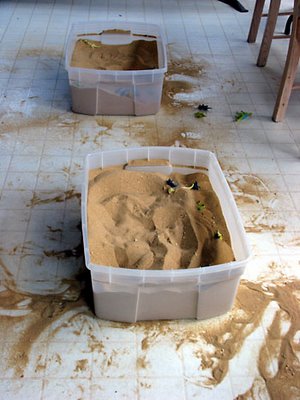 What's a party without a little science? I used the old baking soda/vinegar trick in tiny volcanoes made from film canisters with playdough around them. Each guest had their own volcano. We also went on an (indoor) dinosaur egg hunt. We put little dinosaurs in Easter eggs, then paraded around until the eggs were found. Bear in mind that 7 of the guests were three years old.

Since T-Rex's are the king of the dinosaurs (as I've been informed daily for several weeks) we had a sand castle cake. I found this idea at some cake site last year. The "sand" is brownulated sugar. You can put it on the frosting but then the frosting is sort of crunchy- bad mouth feel. The sea shells are melt and pour candy. I mixed white with just a touch of chocolate, then "painted" them with luster powder. 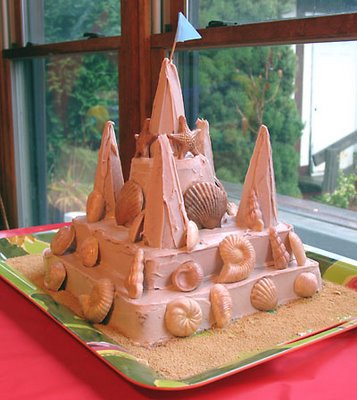 Here's evidence that I still quilt. Look closely, and you'll see that the lights are on on the Bernina. 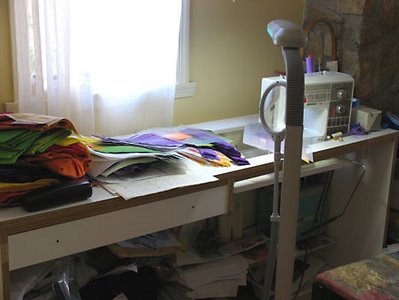 wow! you are a cool mom! I love all of your dinosaur party ideas and that cake is spectacular!

what a great party!!!!!!!! The fossils are a great idea! The cake is incredible - I love that lustre powder stuff....

Love those fossils! And the knitting looks pretty damn good too.