Well, summer's over and it's been mighty busy.

My newest quilt, The Gathering, was accepted for the Houston IQA show. Under the Rainbow is already in Pennsylvania awaiting the Pennsylvania National Quilt Extravaganza. I'm writing a magazine article on Machine quilting, and have begun working on two small quilts for invitational exhibits.

Two of my quilts are in an exhibit hanging in the International Terminal at Baltimore/Washington Thurgood Marshall Airport. I'm going to try and head over there sometime in the next week or two and share some photos with you.

Somehow this summer has ended up being super busy despite no day camps for kids! I personally spent three fun filled (but sweltering) days and nights at a Cub Scout camp in Haymarket, Virginia with my middle son, the oldest went to a week long Boy Scout camp, and we all had a lovely respite in Lewes, Delaware. We also have some *major* (re)construction going on around here that's been keeping us hopping. I haven't gotten much quilting or dyeing done, but with school starting tomorrow hopefully that will soon change.

Here's a little guy I found wandering around the coreopsis and zinnias a few weeks ago. 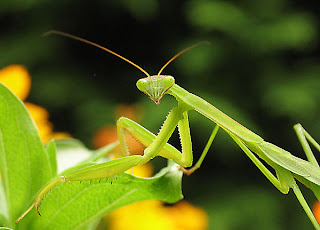