This has been such a great week (despite my seasonal allergies!). I worked hard to clear out my basement lair enough to make room for the Horn table to return to its rightful place. My last two quilts were made in the living room, amidst the pitter patter (or thunder, depending on the child) of little feet. I loved being in the midst of it all, and needed to be, but trying to do precise quilting while the table is shaking or loud Pokemon battles are occurring does increase the degree of difficulty somewhat. Now the table and machine are in a well lit space and I'm raring to go.

Here are some of the hand dyes I made about a week ago. 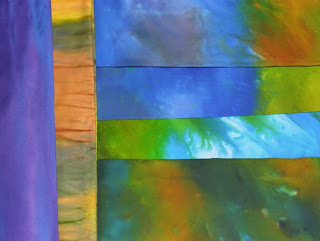 The horizontal fabrics are the borders for my new quilt, the vertical ones were made with leftover dye. I'm happy to say that the borders are on the quilt, and I'm hoping to baste today or tomorrow.

My *biggest* news this week is that I was awarded second place in the Small, Non-Traditional Wall Quilt Category at the AQS show in Paducah! Here's a link to the winners list, which includes links to photos of the quilts. I won't be able to make it to the show, so if anyone is going I'd sure appreciate a photo of my quilt!

I hope you all are having a great week too.
Posted by Diane Doran at 8:10 AM 7 comments:

First off, the view: 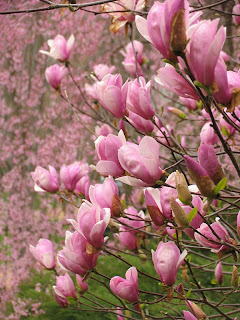 No complaints about that!
And here's my fabu setup: 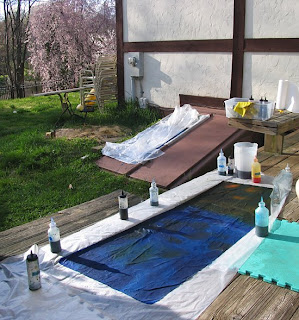 I was *very* lucky - it's been quite cool this spring, but Thursday was a super bright day in the 70's. I wasn't quite ready to dye the borders, but rushed to get it done with such perfect weather. I was especially concerned about the temperature because I was using so many blues, and some turquoise. Those attractive storm doors to the basement get very hot, so once the fabric was just damp (and not dripping) I transferred the fabric over there to "cook" it some. Three out of four borders came out just right, the fourth I redyed on Saturday. 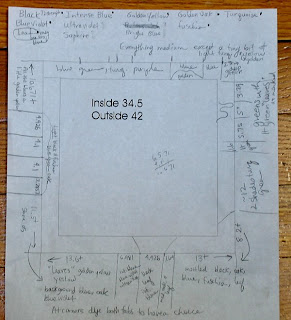 I measured color changes in the background of my image, then wrote notes to myself on what dye colors to use and where to change them. I don't mark the fabric, but use this as a guide. I used the same technique last year for Under the Rainbow and was happy with the results so thought I'd use it again!

So how have I been Resq'd? When I print out an image on fabric in strips, I somehow have to baste the strips before sewing in order to line up the image properly. Previously I've glue basted in the seam allowances, but I wasn't completely sold on how that worked out. I bought some Res-q Tape at Joann's, and it worked amazingly well. (My package says Dritz, not Collins, but I'm pretty sure they're the same product.) Now I have no stiffness in the seam allowance, and I can press it open if I want to.
Posted by Diane Doran at 12:24 PM 3 comments: